Clare Amos, Diocesan Director of Lay Discipleship reflects in this week in which the Feast of the Transfiguration falls. You can contact Clare at clare.amos@europe.anglican.org 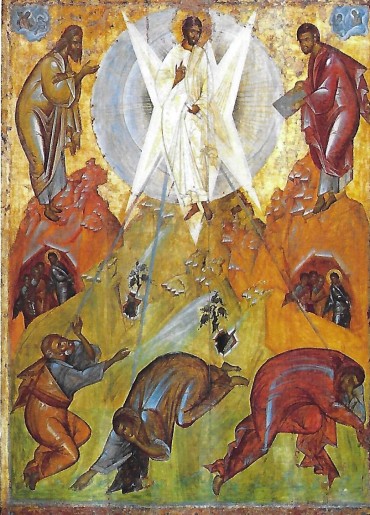 Theophanes the Greek: Icon of the Transfiguration

A couple of months ago meeting  via Zoom (as one does!) with some diocesan colleagues, one of the group commented that our experiences over the last few months were the most difficult times any of us had had to live through, or were likely to have to do so. I had to demur. For it is not the case for my husband and myself.

I am very conscious that Alan and I are comparatively ‘privileged’ for these Coronavirus times. We live in a lovely house, with a large garden, in glorious Dorset countryside in a village with a great esprit de corps. If you have to experience lockdown it is a good place to do so. What is more, since both of us are formally retired from paid work (though we do seem to be busier than ever at the moment!) we are spared the threat of redundancy that is understandably creating anxiety for a great many people.

But for us, there is really no comparison between the ‘hardships’ of the present, and the fear and challenges we lived through on many occasions in Beirut, during the Lebanese civil war of the 1970s and 1980s, including the Israeli invasion of Lebanon in 1982.  Alan became chaplain to All Saints Anglican congregation, Beirut, in 1975 just as the civil war was beginning. He had arrived in Lebanon a couple of years earlier to teach at the Orthodox seminaries, and found himself asked to take responsibility for the chaplaincy. Alan and I met in Jerusalem in mid-1977 when I was lecturing at St George’s College, deciding to get married 5 days after we met, and I moved to Beirut in January 1978 – for an ‘interesting’ first few years of marriage. We of course contravened all the sage advice designed to facilitate and lead to an enduring relationship. All I will say is that we are still married 42 years later.

We left Lebanon in August 1982, towards the end of the Israeli siege of West Beirut, having lived under siege for the previous couple of months, with little electricity, water – and certainly very little security. I can still hear the scream of the Israeli jets dive-bombing parts of the city, and wondering if our apartment building would be their next target, not least because in the car park outside the Palestinian Red Crescent had set up a mobile communications centre which seemed to be doubling as a broadcasting station for the ‘Voice of Palestine’. In spite of all this, it was a profound wrench to leave that country that meant so much to both of us. In fact it wasn’t the war that caused us to leave. It was due largely to the embedded sexism of the missionary organisation which we were associated with, which had led us to apply for lecturing positions at Westcott House Cambridge, to which we had been appointed in March 1982. We felt we needed to honour these new roles, even though when we applied for them we had not expected what was to come in the summer of 1982. In retrospect I am glad that we left then. Dangerous though it was, up to 1982 life in Beirut was not more hazardous if you were a foreigner. That was to change within a year or so, when the deliberate targeting of foreigners for hostage-taking began. If we had continued to live in the country we would either have had to leave very quickly after a warning – or if we had left it too long Alan would probably have spent a few years enjoying the hospitality of Hezbollah.

I have mentioned this personal history largely to explain why the explosion in Beirut earlier this week, has moved and saddened me so. As I wrote on my facebook page the morning after the blast I am not sure whether the fact that it seems to have been a terrible accident due to institutional incompetence makes it better or worse. When we lived through the civil war in Lebanon we used to tell ourselves that out of all the horror and bloodshed a ‘new’ Lebanon might emerge, with an end to its sectarianism, fostered by the corrupt political class for their own ends. It has become apparent in recent years that the ‘old’ elite and old attitudes are still very much in control.

Alan was chaplain of All Saints Church in Beirut. Due to its position close to the Green Line it was shut up for much of the civil war (our regular Anglican services during the period took place at borrowed churches in the city). The last service held in it for about 12 years took place on Ash Wednesday 1977 (there was plenty of dust and ashes around!). I myself never went inside the church until a visit to Beirut in 2012 though I was told a lot about it. It had been a building much loved by the church community. It used to be on the seafront, and sometimes members of the congregation would dive in immediately after Sunday service.  In fact the structure of the church survived the civil war fairly much intact, and it was well restored and even extended in the 1990s and more recently. It is no longer on the seafront  however – since the coastline has been changed by a fill of earth and rubble. It is also now surrounded by tall apartment blocks, hotels and shops, definitely a small ‘house of God’ in the middle of mammon. Ironically this week mammon seems to have protected it fairly well, for although it is only about 1 km from the site of the explosion, the surrounding taller buildings shielded it to a considerable extent. Quite a lot of the glass in the church hall shattered, but other than that there was not substantial damage. In fact, the Near East School of Theology where I lectured when we lived in Beirut suffered rather worse. Though it was further from the epicentre of the explosion, the fact that it was a much taller building with a plate glass front meant that the damage there was considerable. 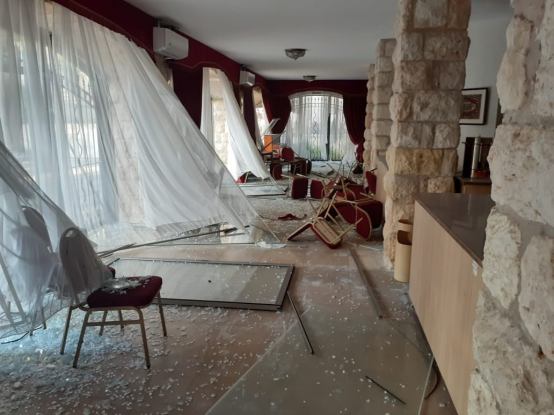 Damage at All Saints after the explosion of 4 August 2020.

My years living in Lebanon have profoundly influenced my theology, and certainly encouraged my interest in the theme of transfiguration. Parts of Lebanon are still heart-stoppingly beautiful – in spite of the continuing corruption that allows virtually unfettered building to take place. Lebanon encourages me to reflect on what it might mean to transfigure disfigurement. My interest in the theme of religion and violence has also been provoked by my experiences in the Middle East, and there too I think that the language of ‘transfiguration’ has helpful insights to offer. As it happens I was preaching yesterday (6 August) for a Zoom service celebrating the Feast of the Transfiguration. I share some of my reflections offered then below – and they are complemented by a powerful series of short poems that my husband Alan wrote after hearing the news of the explosion. Pity the Nation, Pray for Lebanon.

Why the theme of transfiguration is important to me…

God bless Lebanon,
Guard her children,
Guide her leaders,
Give her peace;
May Lebanon become once again a place of unity in diversity,
Where all may learn to honour one another,
And humankind as your creation.
In the name of Christ we pray. Amen.

Fragments for a Lebanon blown apart…

This country is cursed
shouted the young man
in shattered Beirut

He was right of course
not cursed by Allah
but by religion.
( I use the term Allah because in Arabic it is used both by Christians and Muslims)

Abraham, Jesus,  Muhammad
all had problems with religion
as they found it
corrupted upon earth

It takes a human being
to turn the best into the worst.

This is the Ottomans’ doing
how they made each sect
a little empire in itself
paying homage to their Sultan.

Pity the nation that acclaims the bully as hero,
and that deems the glittering conqueror bountiful…

Pity the nation divided into fragments,
each fragment deeming itself a nation.’ (Khalil Gibran)