Drawing particularly on Acts 2.1-21, the Revd Dr Mark Barwick, the Priest-in-Charge of St Alban’s Church in Strasbourg, France, invites us to see the Spirit’s outpouring at Pentecost as the sign that God is ever bringing forth something new.

In Luke’s narrative of the early Christian movement, the outpouring of the Spirit upon all flesh (Acts 2.17) is appropriately framed as occurring at the Jewish festival of Shavuot. Shavuot was called ‘Pentecost’ by the Hellenistic Jews, because it fell fifty days after Passover. It was a time of great rejoicing and celebrated two important events. First, it was the occasion to give thanks for the new grain of the harvest (Leviticus 23.15-21). Coming fifty days after the feast of unleavened bread, which recalled their years of bondage in Egypt, the people now marked something altogether new. The grain which sprang forth from the land that God had given was now offered back to him with thanks.

Secondly, Shavuot marked the occasion that the Torah was given to Israel as the people gathered at Mount Sinai. This was the moment when Israel became a nation, united in the covenant that God made with the people of his choosing. This, too, signified that God was doing something new and wonderful in their midst. 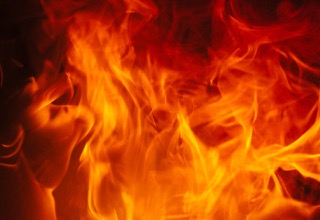 And now the  powerful winds and fire of the Spirit have swept over the people once more, bringing signs and wonders that herald the ‘great and glorious day of the Lord’ (Acts 2.16-21). Peter picks up the apocalyptic language of Joel (2.28-32) to underscore the universality of his message. God is doing something new alright – and not just with Israel! ‘All flesh’ has been changed forever. God’s mighty deeds are now proclaimed in every language (Acts 2.11) and not just in the ‘language’ of the Jews.

Because Pentecost was an important time of pilgrimage, ‘devout Jews from every nation under heaven’ (Acts 2.5) had gathered in Jerusalem. This would be the right moment to announce the start of a new era – and this is why Luke places the Spirit’s outpouring in this time and place. Yes, the Holy Spirit had been present long before Pentecost! But now that same Spirit would be known to everyone. And that same Spirit is as present in our time as it was on that day.

Those of us at St Alban’s Church in Strasbourg have a ringside seat to witness this on a regular basis. Like many of our congregations in the Diocese in Europe, there is tremendous diversity in our membership, sometimes seeming like we, too, come ‘from every nation under heaven!’ Of course, this would be as much of an exaggeration as it was in Luke’s narrative. Even still, Strasbourg itself has been an important crossroads for many centuries (thus the name Straßburg, the town at the crossroads). The city has been a prominent cultural, intellectual and commercial centre in Europe. It is also the seat of a number of European institutions and bodies.

Throughout its history, St Alban’s has, in many ways, mirrored the diverse and expansive environment which surrounds it. And yet no church exists only for the sake of diversity. You can find that in the many political and cultural associations sprinkled throughout the city. St Alban’s is above all a company of those who have heard echoed within their hearts the cry of ‘the spirit of adoption’ (Romans 8.14-17), bearing witness to the call to become children of God.

This is the same spirit that sang out with rushing wind and fiery tongues on the day of Pentecost. A new people – new creation – was being birthed. And births are usually a messy and painful affair. This is as true today as it was then – just have a look at all the messiness in the succeeding chapters of Acts! The witness of the Spirit does indeed bring assurance; it also brings its share of upheaval within and conflicts without. Anyone hoping for a gentle ride should take note.

It is the outworking of this new creation that is the challenge. The new always brings resistance from the old. Even the liberated Israelites wanted to return to the fleshpots of Egypt! And yet God is ever yearning to bring forth something new and more beautiful than we had ever imagined.