Drawing on all the lectionary readings appointed for the Fourth Sunday of Lent (Joshua 5.9-12; Psalm 32; 2 Corinthians 5.16-end; Luke 15.1-3, 11b-end), Canon John Wilkinson, Associate Chaplain and Canon Pastor at the Pro-Cathedral of the Holy Trinity, Brussels, challenges us to model God’s own grace in our lives and links.

It is good in the middle of Lent to be reminded that it is not all doom and gloom. Indeed Lent is not just about repentance; it is primarily about celebrating the boundless grace of God, in Christ, which both makes sense of penitence and makes it possible.

For the people of Israel, the purpose of the Exodus had been accomplished. The Prayer over the Water in our baptism liturgy speaks of God having ‘led his people through the waters of the Red Sea to freedom in the Promised Land’, but here at Gilgal, having experienced a similar crossing, this time over the Jordan, the people had now arrived in the Promised Land.  They were now in the right place, the place of restoration, of fulfilment, of restoration.  And in the context of this restoration, the sign of the covenant, circumcision, could be restored, and the sign of the rescue, the Passover, could be celebrated.

But they were able to do that because of the grace of God, who had said to Joshua, ‘Today I have rolled away the reproach of Egypt from you.’, upon which message the name Gilgal is a play on words.

Our psalm picks up the theme. The overarching theme is that despite our failure to confess our sins, and continuing propensity for disobedience, the grace of God continues to be active and powerful.

‘Blessed is the one whose transgression is forgiven, whose sin is covered,’

cried out the Psalmist, knowing who it was who forgave and covered his sin.

‘Blessed is the one against whom the Lord counts no iniquity, and in whose spirit there is no deceit.’

It is as ever, the Lord himself who restores and reconciles.

And Jesus too speaks of this in this parable.   Amongst all the other themes, there runs through it a golden thread of grace; the grace of a Father, patiently and lovingly waiting, inelegantly and inappropriately running, lavishly and selflessly welcoming; and all of this despite the grumpy jealousy of the older brother, with whose response the father’s grace stands in sharp contrast. 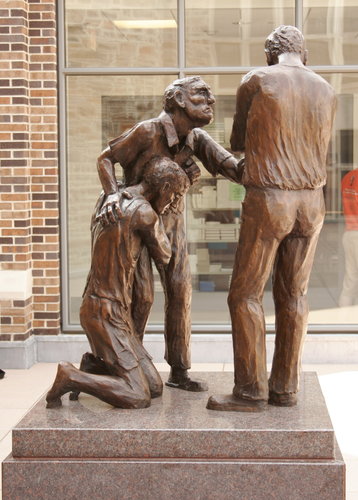 The Parable of the Prodigal Son: Statue by Margaret Adams Parker at Duke University, USA.

Paul’s teaching 2 Corinthians reflects upon the theology behind these stories and offers a salutatory application for us in Europe today.

For the people of Israel entering the Promised Land; for the Psalmist reflecting on the wonder of his restoration; and for the returned prodigal son, it must all have seemed like a new act of creation.

‘We are back where we were meant to be after years of wandering’;

‘I said, ‘I will confess my transgressions to the LORD’, and you forgave the iniquity of my sin’;

‘It was fitting to celebrate and be glad, for this your brother was dead, and is alive; he was lost, and is found.’

It all looks so new even if it looks familiar. God has done a new thing and has done it through grace.

‘Therefore, if anyone is in Christ, he is a new creation.
The old has passed away; behold, the new has come,’

But that is not where Paul stops.

If, through God, a new creation has been brought into being, surely as those who are made new in that new creation, we are also called to live reconciliation; to live restoration.

Grace is not cheap; grace is as costly as a ‘fatted calf’ on top of a whole inheritance.   It will not be cheap for us either to live restoration and reconciliation; to model God’s grace in a world where grace is counter-cultural and in a church where the world’s values so easily have greater influence than they should; to model God’s grace in Europe where divisions are becoming increasingly apparent and where populism is growing in strength; to model God’s grace, in the United Kingdom, where families, friendship groups and communities have been riven by disagreements over Brexit.

It will never be easy; it was not easy for the father to gird up his robes and run.   He did it because of his ‘Oh, the overwhelming, never-ending, reckless love’

But it will also always mean that a way is open to us and to others to stand with the people of Israel at Gilgal; to reflect with the Psalmist; and to hear of the reckless love of the father.

It’s good in the middle of Lent to be reminded that it’s not all doom and gloom. Indeed Lent isn’t just about repentance; it’s primarily about celebrating the boundless grace of God, in Christ.